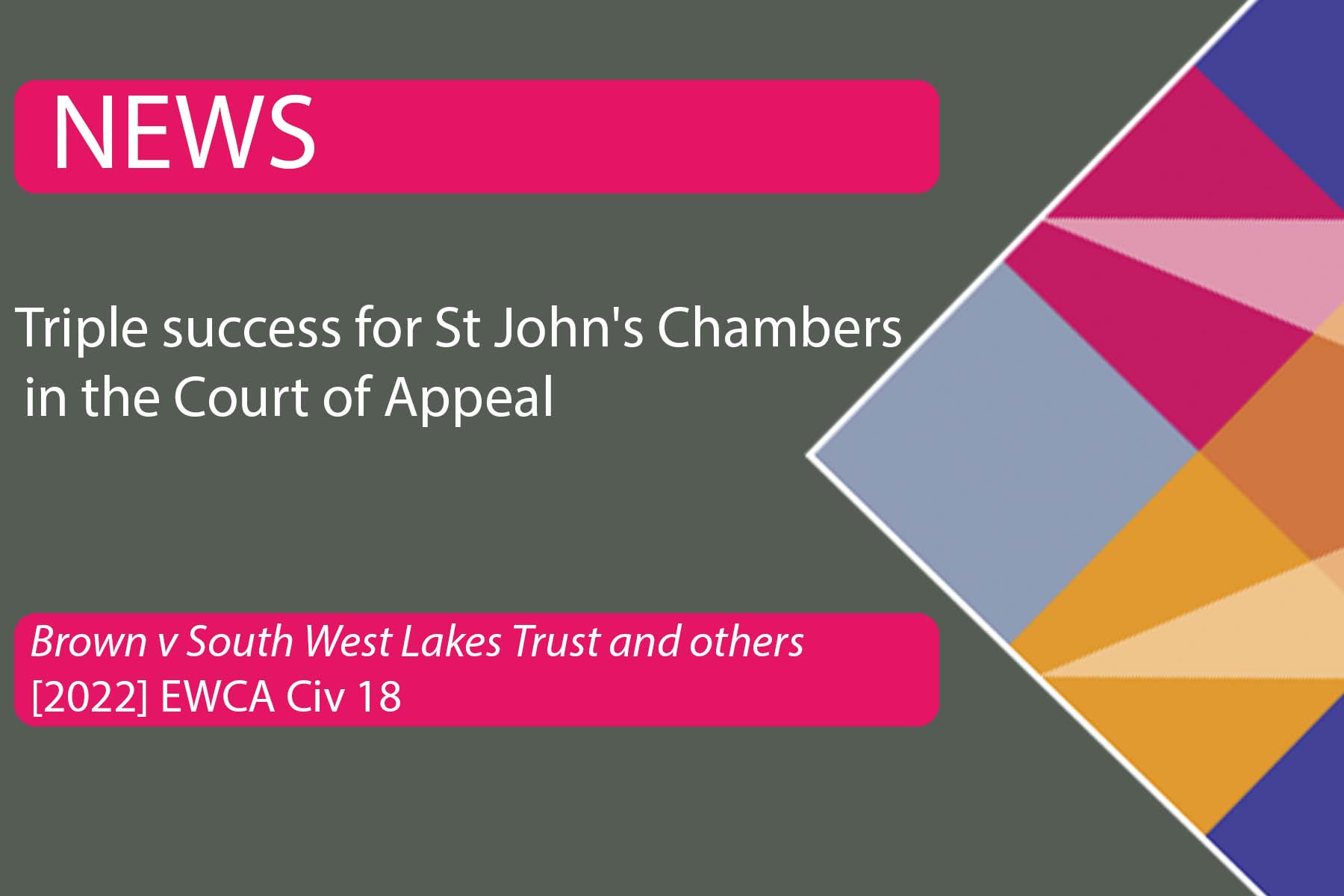 Three members of our Personal Injury team were all successful in the Court of Appeal in a judgment handed down on 17th January 2022 in the case of Brown v South West Lakes Trust and others [2022] EWCA Civ 18, arising from a fatal car accident in 2017. This case raised issues concerning the extent of the duty of care owed to unintentional trespassers by occupiers of land adjoining the highway, and the potential liability of the relevant highway authority for the configuration of the road. The decision of the Court of Appeal can be accessed here.

On an evening in May 2017 Helen Brown was driving her car on the road running along the south of Stithians Reservoir in Cornwall. Shortly after rounding a sweeping left hand bend the car left the road and crashed through a chain link fence into the water of the reservoir. Tragically, Mrs Brown drowned before she could be rescued. Her estate and dependants (represented by James Marwick, led in the Court of Appeal by Robert Weir QC) claimed against three defendants:

The claimants alleged a variety of failings on the part of D3, including negligence in the original design and construction of the road.

All three defendants applied to strike out the claims against them and for summary judgment, on the basis that none of them owed a duty to Mrs Brown.

His Honour Judge Gore QC struck out the claims against each defendant. He held that Mrs Brown had been a trespasser, so that the claims against the occupiers could only be pursued under the Occupiers’ Liability Act 1984. He concluded that no duty was owed, because there had been no danger due to the state of the premises as required by s 1(1) of the Act, and it was insufficiently arguable that occupiers of land adjoining the highway owed a duty to prevent cars from leaving the highway and coming onto their land.

As for the highway authority, the Judge said that it had neither been alleged nor evidenced that the sharpness of the bend it had built in 1967 was dangerous in itself, or that it was responsible for this accident. Nor were any of the other claims against D3 sustainable in law.

Before the Court of Appeal the claimants argued that the danger confronting Mrs Brown had in fact been due to the state of the premises, because the existence of the reservoir posed a real risk of injury to anyone who inadvertently came upon it. They sought to distinguish Tomlinson v Congleton BC by arguing that Mr Tomlinson had freely chosen to engage in an activity with inherent risk – diving into the lake – whereas Mrs Brown had not chosen to drive into the reservoir. Absent that choice, the danger she faced could correctly be regarded as due to the state of the premises. So the claimants contended that their claim against the occupiers should not have been struck out. There should be a trial to decide whether they could reasonably have been expected to offer Mrs Brown some protection against that danger, and whether they were in breach of duty.

But the Court of Appeal agreed with the occupiers that there was nothing in the ‘state’ of the reservoir which posed a danger to Mrs Brown. Rather any danger arose because her car had left the highway and travelled through the fence and into the reservoir. Moreover, Dingemans LJ (with whom Lewison and William Davis LJJ agreed) went on to say that even if it had been arguable that the danger arose from the state of the premises, it was not one against which the occupiers could reasonably have been expected to protect Mrs Brown. There was, he said, “nothing in the duties of those occupying properties bordering the highway which extends to preventing drivers on the highway from driving off the highway on to their land.” The claim against the occupiers had correctly been struck out and that part of the appeal was dismissed.

In respect of the highway authority, however, the Court of Appeal held that there was an arguable claim for negligent misfeasance which ought not to have been struck out. If D3 had constructed a highway with a bend which was more acute than that recommended by prevailing standards for reasonable, prudent and competent builders of highways, and the acuteness of the bend was a cause of Mrs Brown’s loss of control and accident, then a claim in that regard had a real prospect of success. To that extent, therefore, the appeal against D3 succeeded and the claim can now proceed to trial.

The circumstances of this case are obviously tragic and one can have nothing but immense sympathy for the claimants’ position. It is obviously correct that they should be entitled to investigate at trial the potential negligent design and construction of the section of the highway where the accident occurred. Clarity on the interpretation of the 1984 Act is nonetheless welcome for the occupiers of land adjoining highways. Had the claimants’ contentions succeeded, all such occupiers would have had to assess whether even the ordinary and natural features of their land could pose a risk to someone whose vehicle might leave the highway. That – let alone the potential requirement then to install crash barriers sufficiently robust to retain any vehicle within the carriageway – would entail a significant additional burden. Permission to appeal to the Supreme Court is being sought by the claimants.